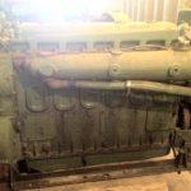 
Dry Docked in December, 2012 for blasting and coating.

These upgrades or repairs were carried out on the dry dock over the past four years:

Drydocked again in Summer of 2015 to perform major upgrade.

10. Replaced 50% of the bottom plating and associated internals.

11. Replaced bulkheads and framing in all tanks.

17. Added Rudder pits on both ends of the drydock.

18. Blasted and coated all the pontoons

21. Added Side bumper pipes on Control Side.

Boats for sale
by continent

Boats for sale
by country